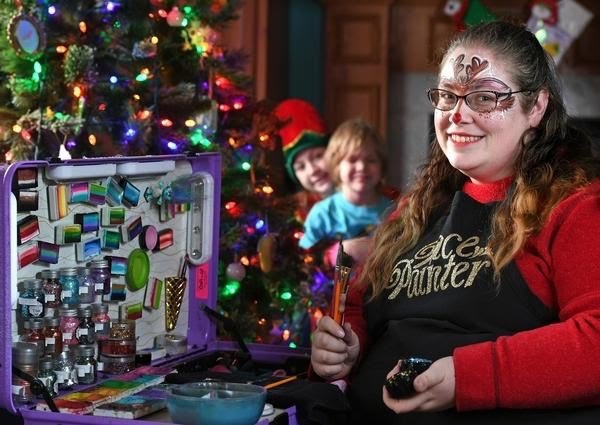 Just like Santa, but without all the breaking and entering. | Photo by Christopher Millette, Erie Times-News

Without further ado, your Idiotville feel-good story of the week: http://www.goerie.com/news/20181217/be-good-erie-face-painter-donates-10008-toys-to-toys-for-tots?template=ampart

Quick personal story to start this week. I’ve been blessed with a beautiful family and I love them all more than anything. My wife and I have three beautiful kids, all boys and all relatively young with the youngest still an infant. Our littlest guy came down with a nasty cough leading into Christmas and, long story short, he ended up with a two night stay at Hamot stretching through Christmas Eve. Respiratory bugs really knock those little guys down.

Missing our families’ holiday traditions had us feeling pretty down. I felt guilty allowing myself to feel that way because as hospital stays go, this could have been so much worse.

Still, this Christmas dealt me a thin slice of what so many less fortunate families feel this time of year: the feeling that something was missing and there was nothing I could do to make it right.

I mention all of this because, right around the time I was down that my little guy would spend Christmas Eve in a nice, warm suite overlooking the bicentennial tower with nurses doting on him, I read about Tara Stonestreet. Tara donated 10,008 toys to Toys for Tots.

That’s not a typo. Imagine donating ten thousand toys, then saying to yourself, “No, not quite enough. Better pick up eight more.” My family donated to Toys for Tots. I think we gave two gifts, and we felt pretty okay about it. Tara gave four times what we gave, plus, you know, those other ten thousand.

Tara has a face painting business, and while it’s always a little dangerous to guess how much money someone else makes, I feel safe in estimating she’s not a millionaire. While most of us give with whatever we have left over, Tara lives on whatever she has leftover.

As to why she gives so much, Tara says:

Growing up, I wouldn’t have had Christmas if people didn’t help my family out. I remember as a Girl Scout making food baskets for people in need for Thanksgiving and then waking up and finding one on my own porch. That kind of thing, and the toys people donated to us, always made me happy because it made me think someone somewhere had thought of me and cared.

Full disclosure – I read that at home with my “big” kids while my wife and baby were at the hospital, and I cried. Not an unmanly amount, but definitely a little bit. I felt a small bit of discomfort this Christmas – just enough to make me thankful for the togetherness we usually enjoy – and I felt guilty for spending even one second feeling sorry for myself.

Tara felt the sting of waking up as a kid during the holidays knowing there wasn’t a lot to go around. Then she felt the warmth of a donation: a basket of food, and some toys. It took the sting away, and made her Christmas a happy one.

So this week’s “Something Good” is a reminder that there are kids out there growing up knowing there is no Santa Claus. Think about that. It doesn’t have to be that way. Because of people like Tara Stonestreet, thousands more kids have a reason to believe.