The President is so busy, he barely has time to watch Fox News’ Maria Bartiromo and rage-tweet. 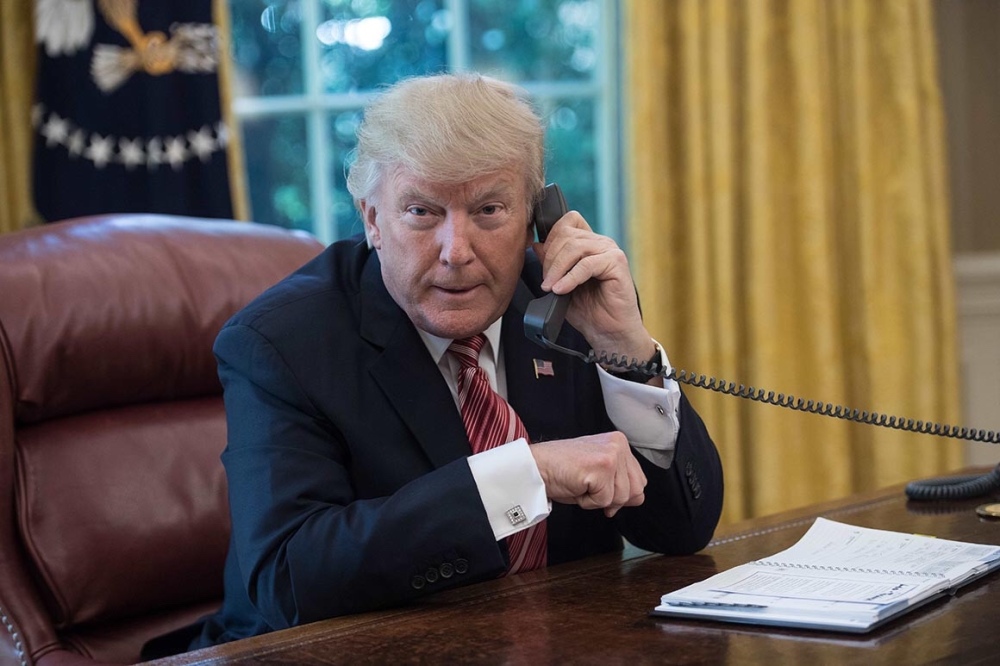 After watching TV and tweeting about how busy he is, the president called into Rush Limbaugh’s radio show.

“[Iran is] allowed to blow up everything that we have and there’s nothing that stops them, and we are…supposed to be very careful with their cultural heritage. And you know what? I will – I like to obey the law.” 1/7/2020 at the White House.

Except, Iran hasn’t “blown up everything that we have.” Trump’s preferred theory of foreign policy, which I’ll refer to as “F*** you and the horse you rode in on,” is all backwards. Its flaw is that the horse (Iranian cultural heritage, in this case) hasn’t done anything wrong. Shooting the horse would be wrong morally while rallying people to Iran’s side. That’s why destroying cultural sites is a war crime. So, it’s great if you “like to” avoid war crimes, but you shouldn’t speak of them like they’re pico de gallo at Chipotle.

“I left troops [in Syria] to take the oil. I took the oil. The only troops I have are taking the oil. They’re protecting the oil.” 1/10/2020 interview with Laura Ingraham.

Taking the oil would be yet another war crime. Luckily for everyone, the president is lying. We are not, in fact, taking Syria’s oil.

Laura Ingraham corrected the president, reminding him that America is not looting Syria’s oil fields. The president immediately backs off, then suggests maybe we should commit the crime he thought we were already committing. Quite a moment.

“We’ve got a very good relationship with Saudi Arabia. I said, ‘Listen, you’re a very rich country. You want more troops? I’m going to send them to you, but you’ve got to pay us.’ They’re paying us. They’ve already deposited $1 billion in the bank.” 1/10/2020 interview with Laura Ingraham.

It is jarring to hear an American president speak of selling our troops to any foreign country, let alone the one whose government murdered American journalist Jamal Khashoggi. If we still want to be the good guys, our troops can’t be mercenaries sold to the Middle East’s highest bidder.

“I can reveal that I believe it would have been four embassies.” 1/10/2020 interview with Laura Ingraham.

When asked what “imminent threat” Qasem Soleimani posed that required his assassination, Trump answers – after a week of contradiction and incoherence – that four embassies were in danger. This latest after-the-fact justification appears to have been invented on the spot. It isn’t true.

“We’ve got him lined up, Adam! You little pencil neck. He has the smallest shirt collar you can get, and it is loose.” 1/9/2020 Trump rally in Toledo, OH.

Donald Trump’s neck looks like an old butt, so he’d rather talk about Adam Schiff’s. 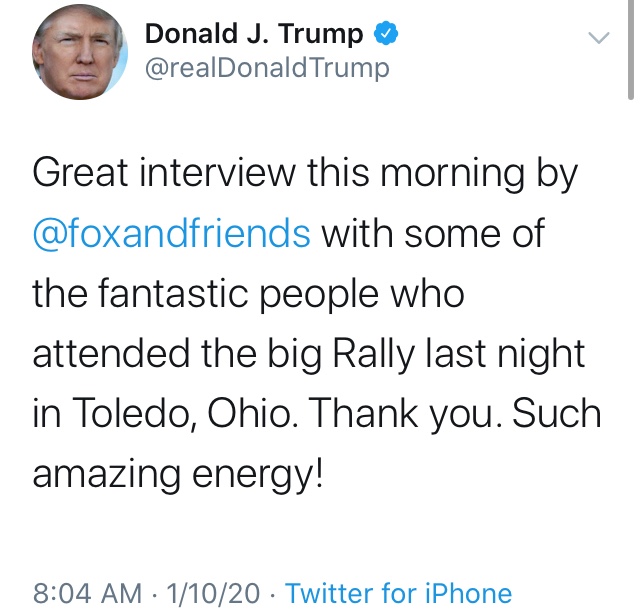 So far this week our president has watched Fox News, tweeted about Fox News, called into Rush Limbaugh’s radio show, sat down with Laura Ingraham, held a political rally, and now combines nearly all of the above – tweets about Fox News coverage of his political rally. Yep. Way too busy to deal with impeachment. 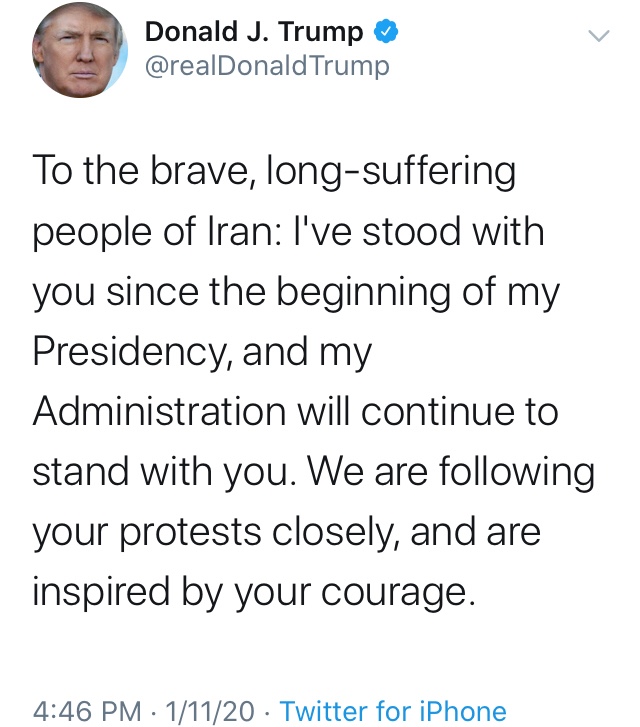 Hard to say you’ve stood with the Iranian people when the very first thing you did as president was to ban every last Iranian from entering our country. 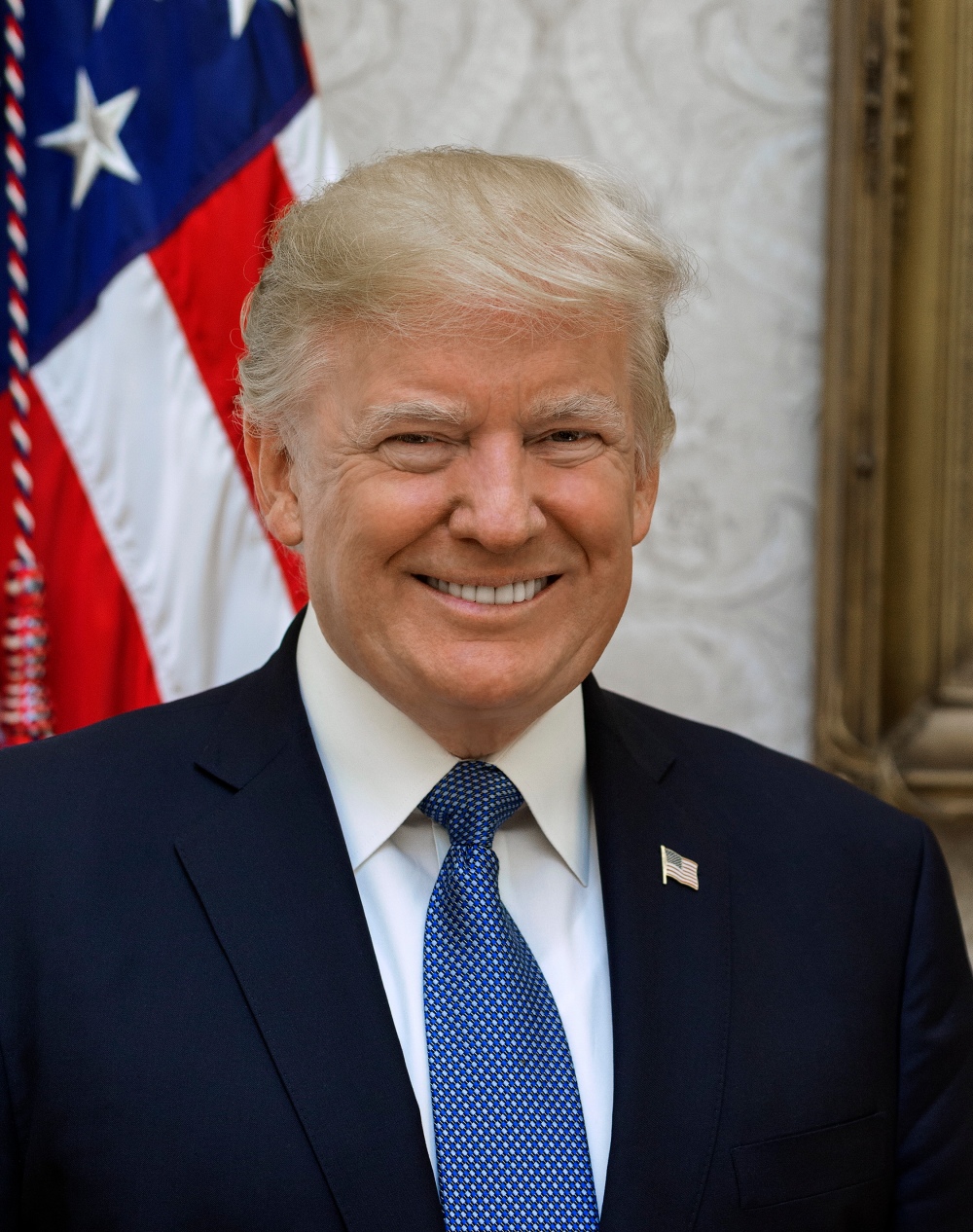 As recounted by famed Republican pollster Frank Luntz, this was President Trump’s reply when Luntz’s asked the president what his middle initial stands for. “Genius.” Trump’s middle initial is J.