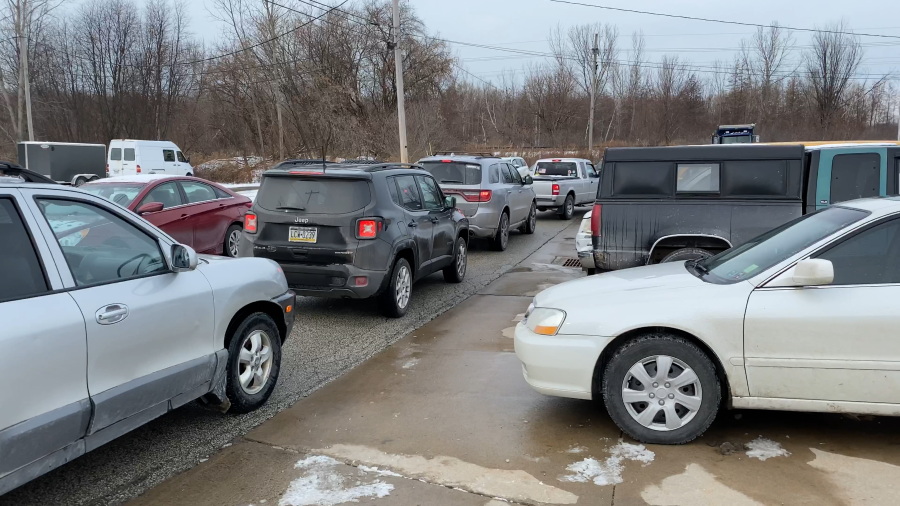 Millcreek Township did not expect over 1,000 people to line up for their recycling barrels in one day. | Photo via Erie News Now.

I’ve always thought “Earth Day” is a misnomer. It’s my own future on Earth that I’m worried about, and the Earth I’m leaving behind. If we humans could figure out a way to leave Earth for another planet like some summer vacation, we’d probably do it and not look back.

That’s not the case, though. Earth is the only place we have, and there are now over eight billion of us here. I know we’re creatures of habit and we’re all busy dealing with the stresses of daily life, which seem to rise exponentially. None of that changes our situation, though.

The garbage is piling up. It’s collecting in our oceans. Waste Management’s landfill at Robison Road now boasts the highest elevation of any point in Erie County, and it wasn’t always that way.

With that in mind, it was a major setback to find out recycling would be restricted throughout our area. When I heard the major reason for the restriction was that China no longer had a demand for Americans’ (exceptionally impure/unfiltered) recycled material, I was disappointed – at myself.

I’ve always recycled, but I’ve never once bothered to look up what is actually recyclable. Have you? I thought I remembered the voice of my dad in my head telling me what should be recycled, and that’s what I did. Apparently, people like me led to a significant failure of the whole recycling project.

Now, things are beginning to come around. People still want to recycle, and with this wake up call so close in the rear view mirror, might become more conscious about it. I know I will, and early returns suggest I’m not alone: Bayfront Glass, LLC opened up last summer to a huge wave of folks toting all the colored glass they’d been saving up since stopped getting picked up at the curb.

Now this week, we see Millcreek donating 1,500 recycling barrels to City of Erie residents. Over 1,000 of them lined up to accept theirs at the initial event, and the remainder will be available from the city to anyone interested in the near future. So the desire to recycle is still here, and with any luck we’ll perfect this before the Robison Road trash heap surpasses Mount McKinley as the highest point in North America.

Are these 1,500 recycling barrels going to save the world? They will not. It’s a little bit of good news, though. After all, there is no magic wand you could wave to solve all the consumption problems among our world’s eight billion people. Might as well start at home.

Here’s a good rundown of how to recycle in Erie County. Let’s get to work!