I’m cheating slightly; this week’s good news is actually a story from two years ago. Remember the Great Christmas Snowmageddon of 2017? It was like the 11th biblical plague befell Erie. The snow was more easily measured in feet than inches. National news picked up the story and for a second, the entire country marveled at what we must have done wrong to deserve such an historical avalanche. 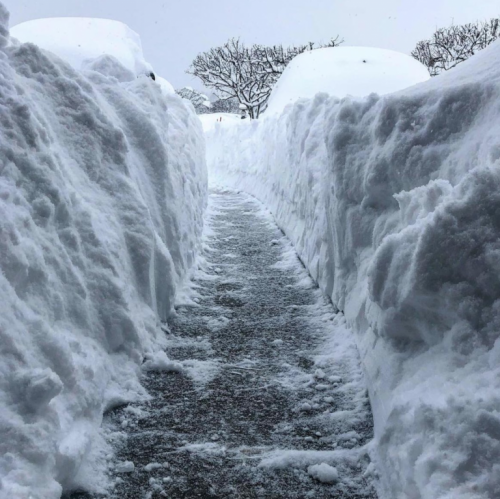 It snowed so much, a giant litter of human babies appeared at Hamot nine months later. The Erie Times-News wrote follow-up stories a month after the storm, six months later, and 12 months later, not to mention the infamous rescinding of the record after a retroactive recounting from some killjoys at the NWS.

That Christmas, I remember driving what is normally a 10-minute trip to my brother’s house with our (at the time) two kids. We almost didn’t make it down the driveway to the road.

Once on the road, it snowed too hard for the defrosters to keep up, so snow kept icing up on the windshield wipers. Every couple minutes I’d have to reach outside the car with my hand to smack the windshield wiper just to see for another 30 seconds.

About halfway there, we came across a fellow traveler stuck in a ditch. I stopped to make sure she was okay. She was fine, but struggling with the news she’d be waiting out several hours of her Christmas alone in that car awaiting a tow truck.

As we chugged along at 15 mph (just fast enough not to bog down, just slow enough to see through the snow), I thought about the horrific possibility of being stuck in my own car for hours with my two little kids – no thanks. We thought about turning back right up until we passed the halfway mark. This was what I imagine people felt like on the Oregon Trail.

Sure, there are other ways you could die on the Oregon Trail, but do you think any of them show up in a Google image search? No.

When we finally arrived nearly an hour into our 10-minute journey, my hands were shaking from the adrenaline. The fear of driving back home ruined my day to a large extent.

So, yes, a white Christmas might be slightly desirable to a green one. Somewhere a mile further down that list, though, is a Christmas so white that it ruins your plans and threatens the lives of your family for having the audacity to open your front door.

If you didn’t have anywhere to go, opening your front door during the 2017 Christmas Snowmaggedon wasn’t so bad. Otherwise it was horrifying.

Fifty years from now, I’ll tell my grandkids the snow was 12 feet tall. This week, I’ll be thankful the only thing I’m shoveling is a giant mass of destroyed wrapping paper and some leftover ham. That’s worth celebrating.