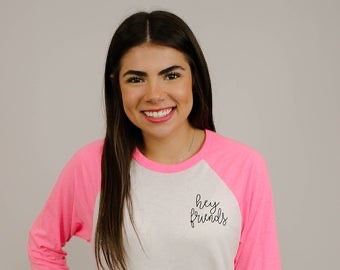 Seventeen year old Shaefer Santos rocking something from her very own Hey Friends collection, available at the Shops at Colony Plaza or shaefersantos.com.

Creating a business is hard. It’s a full-time job, usually undertaken by people that aren’t just sitting around to begin with. That’s certainly the case for Harborcreek’s Shaefer Santos, a 17-year old high school junior who recently found the time to create her own clothing line.

I’m thinking back to my own high school years. I spent those years being scrawny, slugging Mountain Dews with friends during Jay Leno or SNL, sleeping in until 11 whenever possible, and thinking an absurd amount about baseball.

I can tell you one thing I was definitely not thinking about in those days: my career. I worked at McDonald’s back then. I didn’t think about my future, and to be honest I didn’t carve out much time for thinking about the well-being of others. All that stuff was for someday down the road.

“All that stuff” is what makes Shaefer Santos a different kind of kid. Last year, she decided the world needed a little more positivity, but instead of giving someone a hug or donating some old crap she no longer wanted, she went big.

She began ordering plain clothes online, then designed prints for them using Adobe InDesign. She created a website. She marketed these creations. All while 90% of her classmates were ignoring their summer reading lists.

This past July, Santos walked into Lollie Boutique among the Shops at Colony Plaza and began talking to its owner, Sara Kim. She came back the next week toting some of her clothes and – boom. She wasn’t just online anymore. This 17-year old was selling her own creations at a real, brick-and-mortar retail shop.

Her clothing line is called Hey Friends, can be found at the aforementioned Shops at Colony Plaza or at shaefersantos.com, and features clothes with sayings on them such as “Do All Things In Love” and “You Are Enough” and “Actually I Can.” 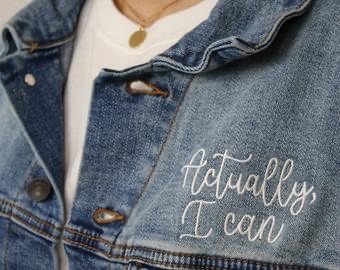 Business is going well enough that Santos recently expanded her collection to include winter clothes printed with holiday phrases. That’s a hint for you holiday shoppers that would like to shop local.

Shaefer Santos is a great reminder that, here in Erie, anything is possible if you’re willing to simply get out there and get something started. Go out and get to work! Pursue your happiness. You don’t need experience or a million dollars. You don’t need to live in New York City, either.

Shaefer Santos is proof that if you have a good idea and the willingness to see it through, you can make something good right here in Erie.