Keep this in mind the next time you hear someone say, “I like Trump because he’s not a politician,” because this is the very definition of pandering. He just doesn’t sound like a politician because he’s terrible at it. Perhaps telling a heavily Hispanic audience he loves them more than our country itself would be more believable if he weren’t still locking their children in cages. 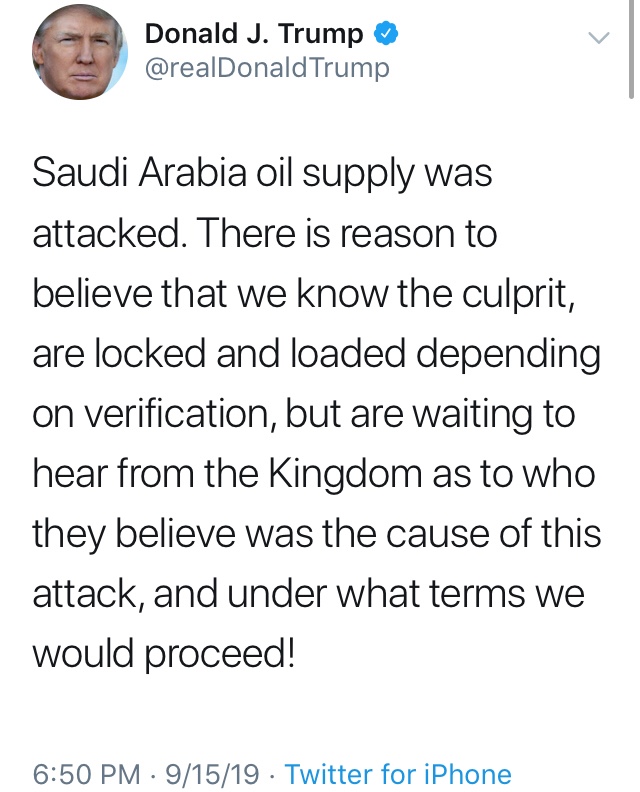 Is it weird hearing Mr. America First ask Saudi Arabia whom our military should attack and when? Yes. It’s weird.

“The Democrats want us to be subservient to foreign producers. They want us to be at the mercy of rogue regimes. That’s not happening anymore.” 9/16/2019 rally in Rio Rancho, NM.

Remember when we asked Saudi Arabia when and where to attack even though nothing happened to us? Some might call that being “subservient to foreign producers.” Remember when that same Saudi Arabia had Washington Post journalist Jamal Khashoggi murdered with a bone saw? We totally forgave and forgot on that one. Remember when President Trump decided to believe Kim Jung-Un’s crazy contention that he had no idea Otto Warmbier was tortured to death in a North Korean gulag? Some might call that kind of weakness being “at the mercy of rogue regimes.” 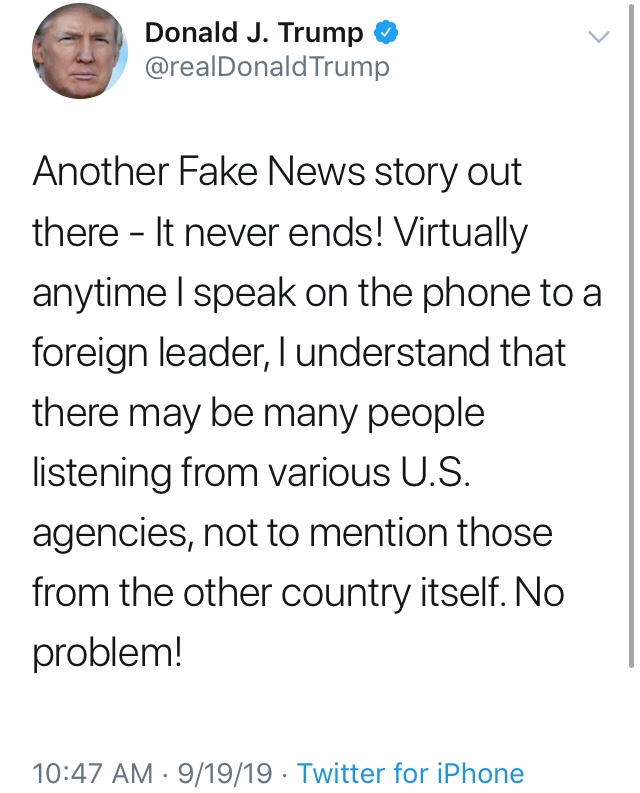 Here’s the real news of the week. It seems the American President was on the phone with the Ukrainian President, when the topic turned to military aid to Ukraine. Trump seems to have said, “Sure, you can have it – so long as you promise to give me dirt on Joe Biden’s son to help my political campaign.” That’s a no-no. Fortunately, Trump denies the story and we know he’d never lie to us.

Wasn’t it Donald Trump that spoke about the size of his penis on a nationally televised presidential primary debate? Yes, I’m very sure Donald Trump would say something inappropriate on a phone call.

This is a problem. His defense has shifted now from “fake news” and “I always knew people were listening in” to an allegation of criminally leaking classified info. Something can’t be fake and classified, now, can it?

Except, Donald Trump already told us he knew people were listening in. He put it on Twitter.

Remember how the “mainstream media” being too closely aligned with Democrats is a threat to the republic? Well, Donald Trump spending an entire presidency watching Fox News and hiring them into the White House is fine. It’s fine.

You know Donald Trump is telling the truth on this, because it’s in all capital letters. No more arguing, you guys. Go on home.