Well, I’m sure the rest of this thought won’t be horrifically racist.

Is there anything worse kind of American than the kind that tells some Americans (s)he’s more American than those Americans? Maybe Donald Trump is an authority on this, though: if there’s anyone that knows who shouldn’t be running our government, it’s the guy that’s cycled through about six administrations’ worth of cabinet officials in two and a half years.

How’s Slovenia doing these days, anyway? Think Melania should go back? Remember when Candidate Trump promised she would hold a press conference on her immigration status? 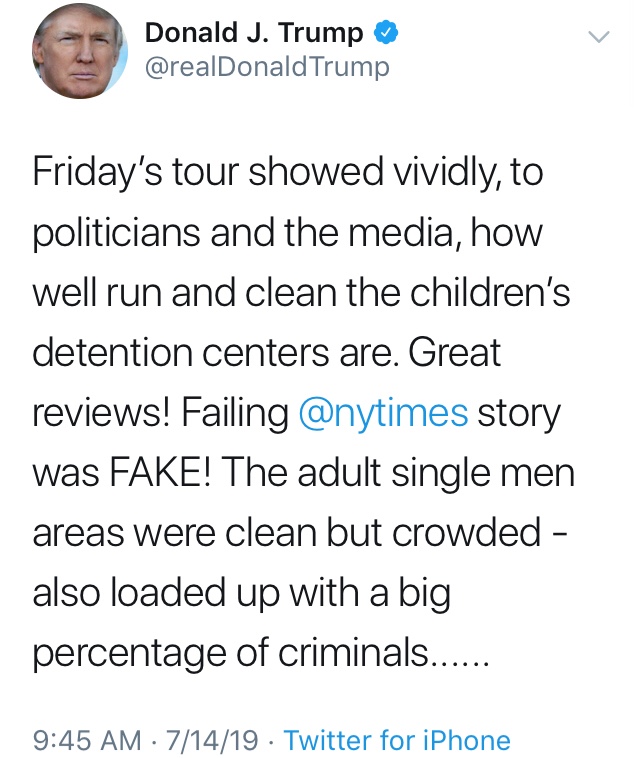 So, the media got to tour an immigration detention center and, surprise! They didn’t like what they saw. So the President would like to call this just another media conspiracy, despite video of young men yelling “No shower!” repeatedly toward the cameras.

Again, hermetically sealing the southern border would not solve this problem – not for the thousands of Central Americans fleeing for the United States through 1,000 miles of desert because they fear for their lives in their homes. “Just don’t come” is not a solution for these people. What it is, is an admission of ignorance from the President. He doesn’t even seem to realize that it’s legal to come here and declare asylum, nor that it should remain so. 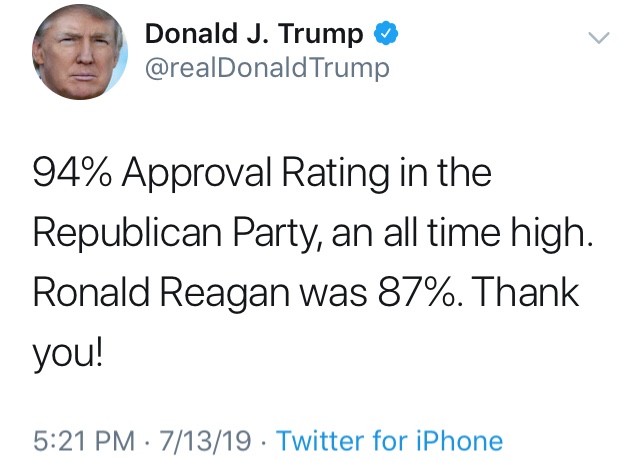 Every so often President Trump will issue this type of all-caps missive, and I typically scroll right along. This time I checked it out and, sure enough, it isn’t true. CNN is a top 10 cable network, unlike Fox News or MSNBC, for total day viewership. Where they have taken a recent hit is in prime time viewers, whom prefer Fox and MSNBC by wide margins. Prime time is when the opinion hosts do their thing, though, which suggests CNN is trusted most during hard news programming and partisans prefer others for their infotainment desires. That doesn’t sound like much of a credibility crisis to me. Sounds like the opposite.

“That’s why my [executive] order supports the selfless individuals who donate kidneys by granting them reimbursement for extra expenses associated with organ donation, such as lost wages and childcare. And those people, I have to say, have never gotten enough credit.” 7/10/2019 at the White House.

This is a great idea! It’s also an idea made possible by Medicare’s innovation center, which was created by the same Obamacare the Trump Administration is still trying to explode, but you have to take the good news where you can get it these days.

No, I don’t think President Trump actually thinks the kidney is located within the heart. I think he just finds the absolute weirdest ways to say whatever he is trying to say about every conceivable topic.

In any battle of wits between the Supreme Court of the United States and Fox News morning show host Steve Doocy, my money is not going to be on Doocy. The Supreme Court didn’t even rule that a citizenship question can’t be in the census, just that the reason for putting it there can’t be “arbitrary and capricious” or “contrived,” in the words of Chief Justice John Roberts. Or, in the words of me, plainly racist.