I’ve always idolized my dad. Half the time I think I should be more like him, and half the time I know he’s crazy. He’s been a tireless force for good to almost everyone he knows, very much including me, and he (along with my mom) shares in the credit for all the things in my life that make me the most proud. He’s thoughtful about every little thing in life with the exception of one huge thing that touches a little bit of everything else – politics.

Before I get into our recent conversation, you need to hear a little more about this guy. My dad is a baby boomer with the lifestyle of someone that grew up in the Depression. He saves everything – everything. He’ll save something “in case he can think of a use for it,” which I’ve learned is code for, “I have no earthly clue what I’m going to do with this thing but it’s staying right here.”

He’ll tell a story of once long ago when he threw something away but still remembered it fondly, then came across some situation where it would’ve come in handy. Decades later, he still agonizes over this. His story always ends the same way: “…and that’s why I don’t like to throw things away if I don’t have to.” He recently decided Waste Management was overcharging him for garbage pickup, so he canceled it. Just canceled it. Could you imagine? This is where I could get into how my mother is a saint, but that’s a story for another day; I need to stay on topic.

I know what you’re thinking: my dad’s a hoarder, and you’re right. But he’s so much more. He won’t talk about this much, but he grew up poor. I don’t know how poor, exactly, and I know there was a lot of love in the home. I’m also not sure if welfare existed back then in the way it does today, but I know my grandparents wouldn’t have accepted it if it did. They always had just enough. Still, I get the sense that childhood feeling of wanting left a tattoo on my dad’s psyche.

He decided early he wasn’t going to be poor. He became the first person in his family to go to college back when it was easy enough to grab a union job with GE after high school and hope for the best. I believe my mom once said that dad had some aid money due to his parents’ lack of means, but I know my dad says he put himself through college by picking grapes during the eastern Erie County summers.

My dad graduated with a bachelor of science – a four-year degree from a great state school – with no student debt, by picking grapes for three months of the year. He is very proud of that, as well he should be, but there aren’t enough grapes in the world for a kid today to do the same. 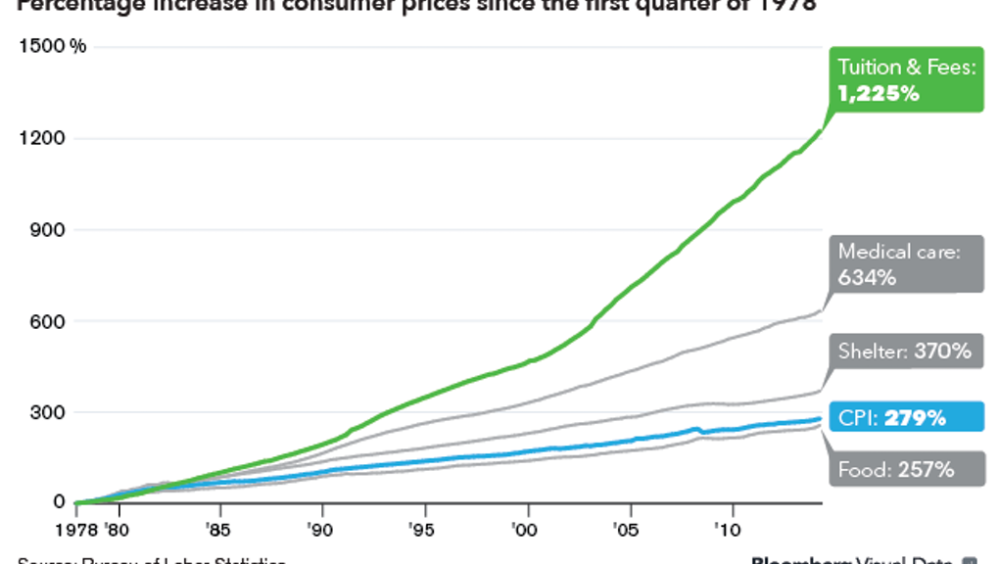 College tuition has exploded by almost five times the rate of inflation since the heyday of the baby boomers. | Chart and data via bloomberg.com

Dad got a good job out of school. He worked patiently, diligently, locally, and proudly for 40 years before retiring last year. He lives “comfortably” now in that he has enough money to feel free, but I wouldn’t describe him as comfortable. Last winter I showed up unexpectedly when mom wasn’t home and found him at the kitchen table eating dinner with his winter hat on. It was 56 degrees in the house. I asked, “Broken furnace?” No. Furnace set at 56. I should’ve known.

My dad lives conservatively so it’s probably no surprise that he leans hard to the right politically, though he almost never talks politics. When I inject current events into our conversations, I get the impression he’d rather be shopping. During the 2012 presidential campaign, for example, dad and I were working on my car. We (I) got to talking about Obama, and I remember dad saying, “Yeah, I just worry he’s gonna take our guns away.”

I remember staring at him blankly, and might’ve rattled off the fact that the only gun law enacted in Obama’s first term was one expanding concealed carry privileges into federal parks. It wouldn’t have mattered. My dad’s entire way of talking politics is through those short “position statements.” Never an elaboration. Rarely a shade of gray. Dad voted for Romney.

A month after the election, some deranged kid showed up to an elementary school armed to the teeth and mowed down 20 little kids, less than a month before his own first grandchild was born. In the aftermath, the paranoia of Republican senators prevented a bill from becoming law that would have required all gun purchasers to pass a background check. Obama never did take anyone’s guns….

Fast forward to the 2016 campaign, and NBC Nightly News is playing in the background while dad and I are talking. It’s the famous Trump “Muslim ban” speech, to which dad scoffs, “he’s a dictator.” I felt a small relief, though I was pretty sure I knew how he felt about Hillary and let’s just say he wasn’t “with her.” Months later, mom told me dad had voted for Trump. My dad had walked into an American voting booth and chosen a man he considered a dictator to be the President of the United States.

I was disappointed but not surprised; his vote was a break-glass-in-case-of-emergency act from someone who’d decided – subconsciously – that democracy didn’t work anymore in America. Politicians were supposed to get things done, but they aren’t. He didn’t have the interest or patience to engage politically to determine whose fault it was that our politicians weren’t compromising. He likely voted for the furthest thing on the ballot from what he considered a “politician” – and ended up rewarding the very Republican politicians who had spent the previous eight years creating the conditions he abhorred.

All of which brings us to last week, and my reason for this entire article. Dad was helping me – again – this time to remove a dead limb from a maple tree in my front yard. The front yard of the home all my dad’s hard work helped me to secure.

In between the noise of our chainsaws, we got to talking about a familiar topic: baseball. Dad was especially annoyed on this day about a recent change baseball had made: the “disabled list,” the DL, had been renamed during the off-season to the “injured list.” It’s the IL now. After having been the DL his entire baseball-loving life, dad was pissed. The IL? It didn’t roll off the tongue just right, not the way DL did. It was an unnecessary change to something that, dammit, was fine just the way it was.

He speculated that some activist group of “handicapped people,” small but boisterous, probably bullied Major League Baseball into making the change. It rankled him. “They’ll probably try to change the Cleveland Indians next, then the Redskins. Where does it end?” I remember thinking, “Probably at the Redskins,” but didn’t say it.

I’ve mostly learned to let my dad have these little rants. I’m not going to change his mind in that moment, anyway, so I’ve just been thinking about it ever since. I am sure I’m the only one. Want to know what I decided? If “disabled” has through the years come to carry some connotation of permanency, isn’t “injured” just a more accurate word? Is that so bad? Who’s life is affected by changing anything from DL to IL? Who cares?

Listen. My dad cares. Millions of people care. The very people that will never forget their experiences of growing up poor and digging out. Millions of people who worked extremely hard for a long time to hand this current version of our country to my generation. Hadn’t they done all that on their own? They never took a handout.

Still, I know my dad had some advantages. I know these advantages are a small minority of his overall story, but they aren’t nothing. I know he never walked into a store, or down the street, with suspicious or disapproving glances because of the color of his skin. Never in his life. So he never had the subsequent talk with mom or dad about how “that’s just the way things are,” and he never had to wrestle with the resultant frustration.

My dad never had a negative interaction with a police officer. He was taught that you called the police when you needed help, that they were trustworthy, and his life experience reinforced that. He flat-out does not understand how anyone in this country could find the police untrustworthy.

I know he grew up and went to perfectly fine public schools that prepared him adequately for his life-changing jump to higher education, and that the cast of characters surrounding his life story up to that point allowed him to dream such a thing was even possible.

I’ve never met anyone that interviewed my dad for a job, but I know none of them threw his resume in the trash based only on the name at the top. Dad acknowledges that happens to some people. He never had to “take the long way” from point ‘A’ to point ‘B’ due to the quick way not being wheelchair accessible.

My dad is so in love with the America he grew up in that he focuses on all the wrong things to restore it. The smallest cultural change sends him into a tailspin he can’t quite put his finger on – he gets bent out of shape by other people getting bent out of shape. He views most policies to restore the middle class he so enjoyed as “welfare,” and so he inadvertently pushes his own success just a little further out of reach for the next generation. He wants compromise, so he rewards the hardliners. He loves the functional democracy of his childhood so much, he votes for the dictator.