Ladies and gentlemen, behold, some (mostly) non-Mueller related s*** the President said during the previous week: 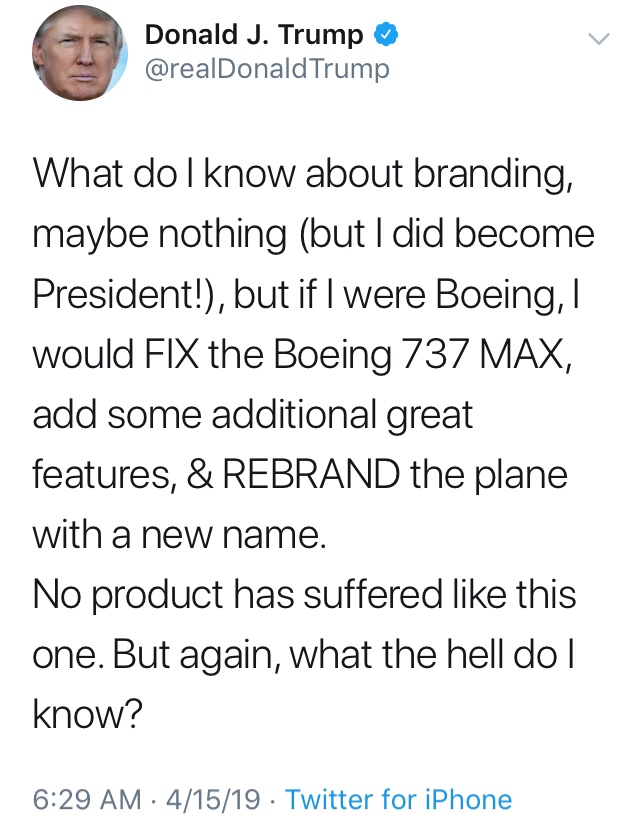 Scene: Boeing execs all sitting around the boardroom. They’ve been there a whole month. They have bags under their eyes and they’re crying and drinking themselves into oblivion when all of a sudden, someone’s phone chimes. It’s the President’s tweet. Someone reads it aloud and a hopeful, half smile appears. The CEO starts a slow-clap as it dawns on all of them: no one ever thought to fix the planes. End scene. Ridiculous as that is, remember that Donald Trump suggested after the last crash that planes were too complex to fly, but now wants “additional great features.” As for himself, apparently his presidential campaign was all just a branding exercise. He knows he’s not really a business genius and reformed swamp creature; that’s just a new coat of paint on the same old con. 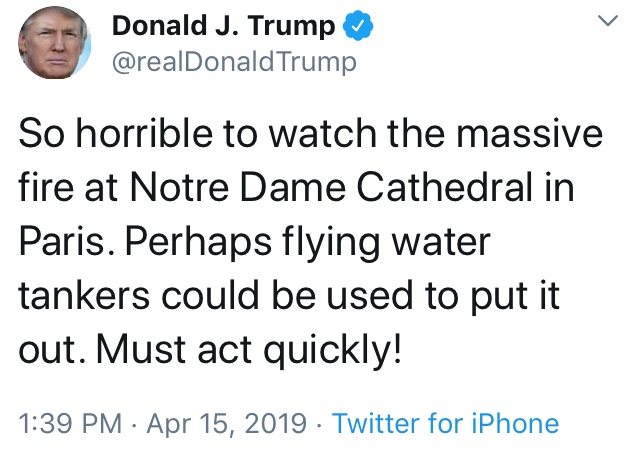 After four days of the Mueller Report blocking out our political sun, it’s hard to believe last week began with Notre Dame burning. While it was, President Trump swooped in on Twitter like the world’s worst superhero to say, “Hey, did you guys try water?” Plenty of folks pointed out that this cure would’ve been every bit as bad as the disease – all that water would’ve crushed the structure. To me, it’s the perfect metaphor for Donald Trump. Our government had legitimate problems before him, and maybe he is trying to help, but so many of his “solutions” only make our problems worse. 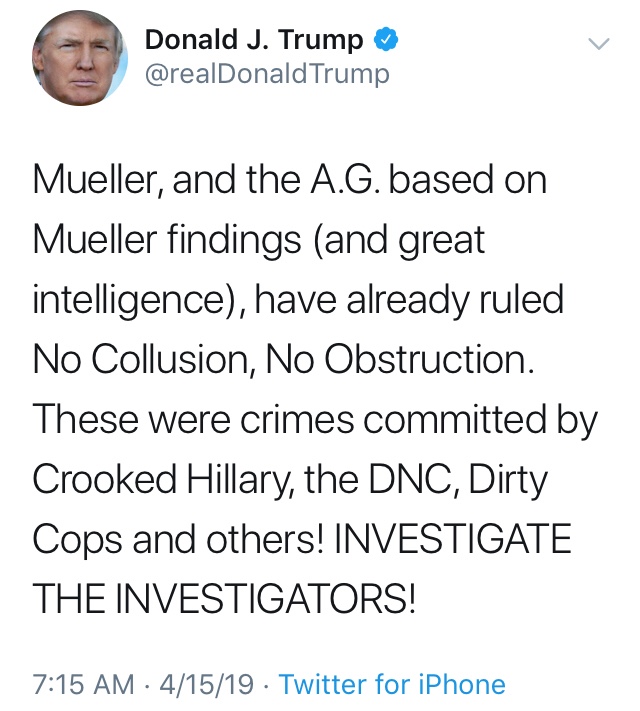 I suspect we’ll be getting into the Mueller Report here on Idiotville Blog shortly, because, whoa, that thing documents rampant collusion and obstruction. Read for yourself here (warning: huge file size). What our President is cheering is not being charged with criminal conspiracy to defeat an American election – hardly something worth celebrating. The reason I include this tweet, though, is to point out how we’ve become numb to these baseless accusations of crime by his political opponents. If these ridiculous accusations don’t face pushback, they can become legitimized. As we speak, Trump’s attorney general is “looking into” how the Russia investigation began, without any of the evidence of wrongdoing that should lead to such an inquiry. Scary stuff. 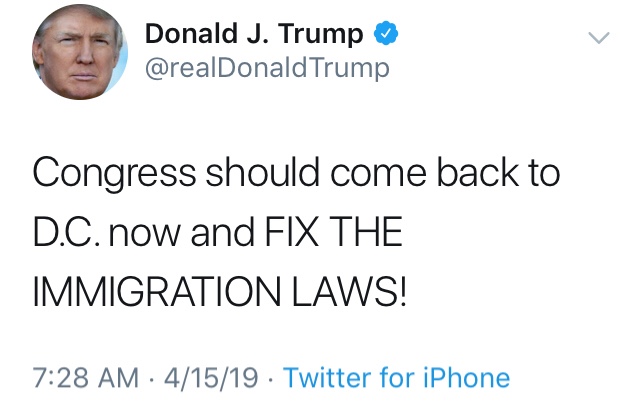 Uh, sir? Congress is in session. Look out your window. 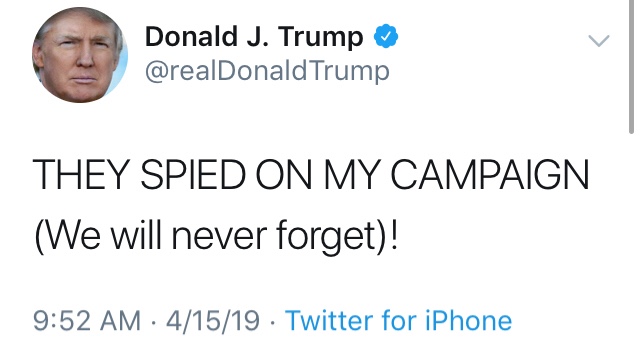 I’m the victim! Whenever you see things like this, remember whom specifically was being “spied” on: Carter Page. Page once described himself as an “adviser to the Kremlin,” and was named an “unwitting agent” of Russia spies in the 2013 bust of a Russian spy ring in NYC. He traveled to Moscow during the campaign while Russia was attacking our election. He was so suspicious, four separate FISA judges (all nominated by Republican presidents, if you’re swayed by those things) approved surveillance warrants on him. Deputy AG Rod Rosenstein personally approved at least one of them and Trump still hasn’t fired him, suggesting he doesn’t even really believe this. 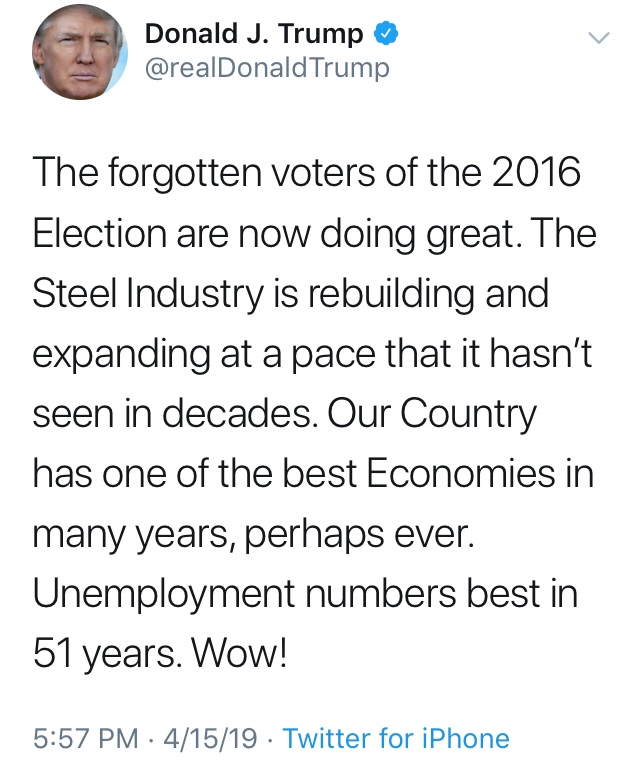 The economy really has continued the positive trend President Trump inherited, to his credit. It’s just not “rebuilding and expanding at a pace” not seen in decades. For example, see if you can spot a Trump miracle in the below trend of industrial steel production. I can’t. 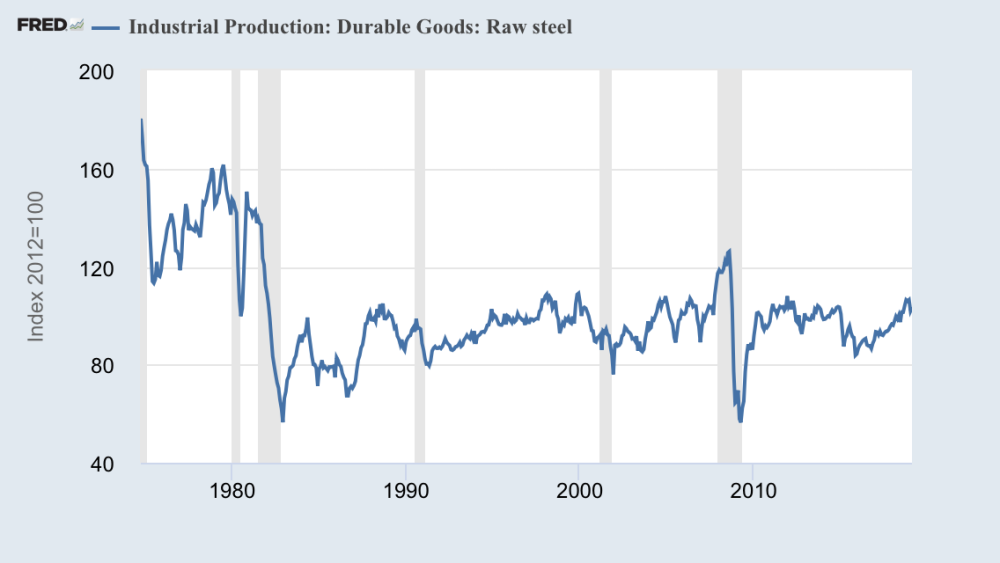 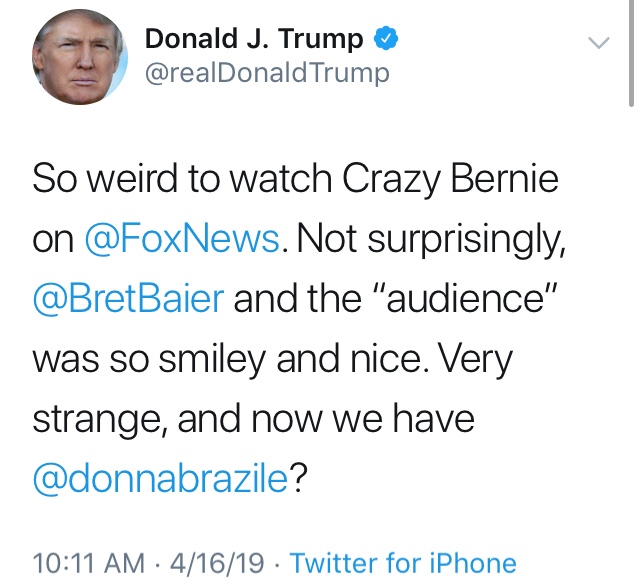 Who’s “we?” And is the President suggesting his one true love, Fox News, would rig something for the Democrats? If “conservatives” do start insisting Fox News is in on some liberal conspiracy, I’ll have to jump off the edge of the earth. 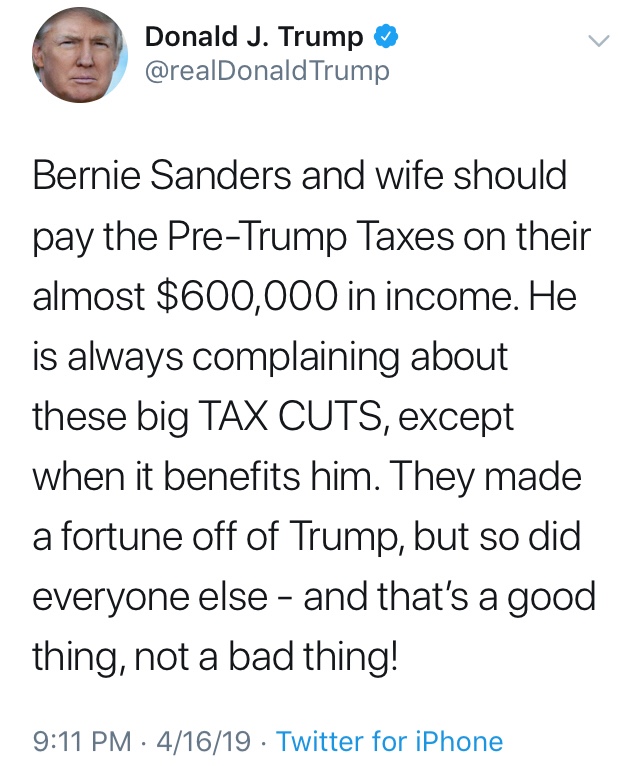 There’s widespread agreement that today’s NFL rules promote tons of offense. Let’s imagine Aaron Rodgers even thinks it’s gone too far, and starts advocating to bring back the old days of 14-9 scores. Now imagine Terry Bradshaw saying, “If Aaron Rodgers really wanted things back the way they were, he should just lead by example and start throwing less TD’s.” Of course, that’s dumb. It would only cost Rodgers money while leaving the root of the problem unaddressed. There’s nothing wrong with playing by the rules as they are while advocating for change. 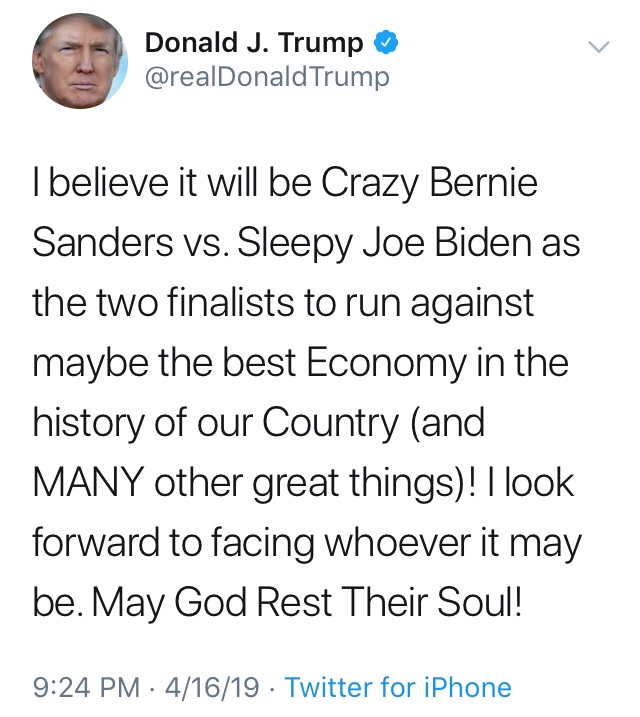 May God rest their soul?! That’s what you say about dead people. Plus, you know, should be plural, because it’s two people. Souls. 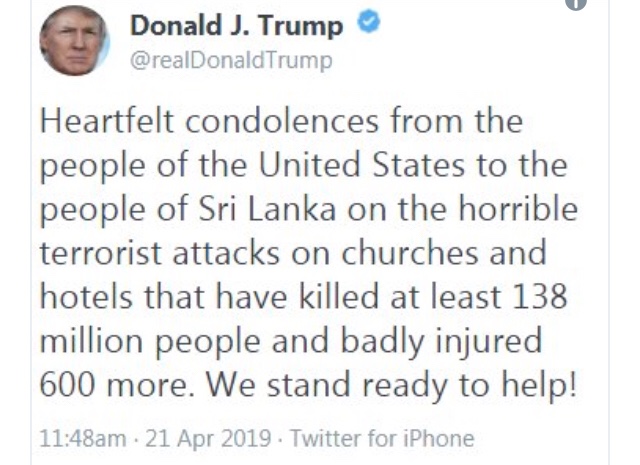 Were 138 million people killed in Sri Lanka yesterday? No. Thank God, our President just gets everything wrong. I shouldn’t even make light of this, because 138 (and counting) people did die and at least President Trump struck the right tone here. He even deleted this tweet and reissued a corrected one, which is why this screenshot looks different than the rest. Please remember this tragedy in the days ahead, because Lord knows our news cycle – and likely our President – will move on all too quickly.