You may have heard we’re currently in the midst of the longest partial government shutdown in American history. That’s not a record anyone should feel good about, and no matter where you come down on the merits of what caused this one (you know how Idiotville blog feels about that), the question remains: how do we reel this runaway beer truck that is the current state of our politics back to something close to normal?

After all, the government ran from our founding until 1976 without a funding lapse, and has shutdown 21 times since then including this current one. That’s pretty incredible, and we can’t just blame it on Donald Trump.

What follow are a few observations, some obvious and some not so much, that I think get to the bottom of why people treat their political affiliation like their sports fandom. My hope is that by chipping away at a few things, little by little, we can stop thinking of Democrats vs. Republicans the way we think about Browns vs. Steelers and begin to remember that our first loyalty is to the spirit of compromise our founders so cherished.

So, first thing’s first: we should stop pretending the disputes of our grandparents’ society were mild or polite. They weren’t.

Stop romanticizing the past

John Adams was our second president and was so sensitive about negative press that he actually passed a law making it illegal to make false statements against the government. Thomas Jefferson then ran against Adams in a vicious campaign, at one point calling Adams a “hideous…character [with] neither the force and firmness of a man nor the gentleness and sensibility of a woman.” Whoa. And all this while Jefferson was Adams’ Vice President!

This wasn’t long before Aaron Burr shot Alexander Hamilton for working against his presidential run. I know it’s popular today to invoke “the founding fathers” as if they were of one mind, but they didn’t just sit around wearing wigs and high socks proclaiming each others’ virtue.

Times were different, though, and the founding generation – usually -seemed better able to put their differences aside for the good of the Union. Why was that? Maybe because they’d worked so hard to create the Union, they didn’t want to see it squandered. Maybe because the only alternative was going back under British rule. Who really knows. What’s important is to realize that while they had bitter disputes, they mostly compromised when they had to. How do we do that again?

There are two structural problems today that remove incentives for compromise. A major one is the state of campaign finance laws. It’s like the Wild Wild West. Politicians long ago discovered that he/she whom has the most cash almost always wins the most votes, and ever since the Supreme Court’s Citizens United decision the gloves are off. 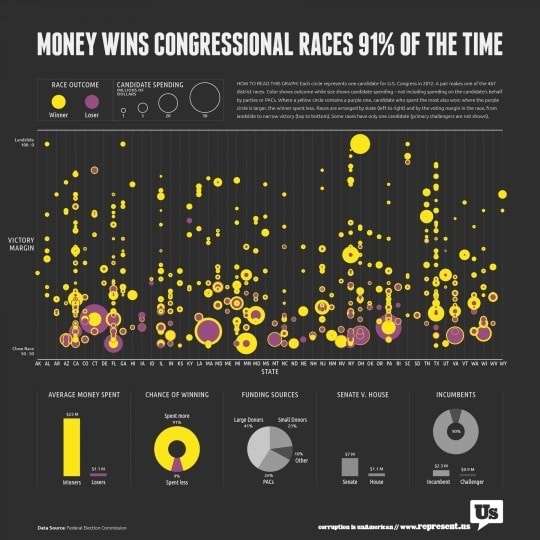 Money talks when it comes to elections. | Image via represent.us

Campaign finance is a complicated area and we won’t go into much detail here, but the effect is that Congress spends an insane amount of their time fundraising. If you’re a senator, think 2/3 of the last two years of your term. That doesn’t leave much time for actually doing your job, but there is another, less obvious issue with this.

The people forking over enough of their hard-earned dollars to warrant a cold call from their U.S. Senator (or House Rep.) are very unlikely to be middle-of-the-road folks content to get part of what they want. The big political donors tend to be more toward the extremes.

So a lack of political finance regulation leads to less time for legislating and more time begging for donations from hardliners. Strict regulation to limit individual (and corporate!) donations, or even publicly financed elections, would help bring our politicians away from the fringes.

With notable exceptions (John McCain was a long-time crusader for sane campaign finance laws, even proposing he and Obama draw exclusively from public funds for their 2008 presidential race – Obama refused because he was winning that fundraising arms race, bigly), Democrats tend to be in favor of stricter campaign finance regulation than Republicans.

The second big factor working to prevent compromise is some extreme gerrymandering. Every ten years following the Census, U.S. House and state legislative district lines are redrawn, ostensibly to account for minor effects like changes in population. This works a little differently from state to state, but usually the politicians themselves are the ones doing the redrawing.

The effect of this is that politicians end up selecting their voters, instead of the other way around. And while the charge of gerrymandering has been leveled since the dawn of the Republic, the age of Big Data has made this problem mushroom out of control just recently.

When Republicans had their most successful election in a generation (the 2010 “Tea Party Wave” election, just in time for redistricting after the 2010 census), it was the first redistricting since everyone and their mother began posting their life on Facebook, and the first since computing power became adequate to model voter tendencies on a large scale.

So instead of the old days when politicians would fight over whether the broad swath of “Little Italy” landed in a particular district, now politicians make these decisions about specific homes, confident they know how each vote is going to play out.

The result is this: 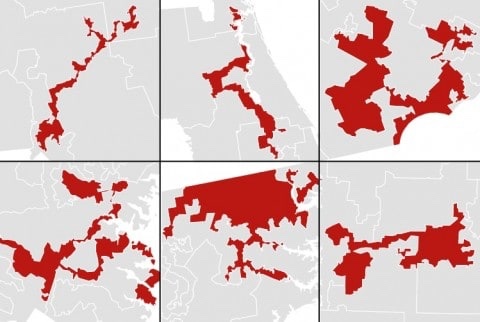 Whoever created these Congressional districts probably weren’t guessing where their votes were coming from. | Image from The Washington Post

Currently, Republicans are the biggest villains in this story due to their 2010 success, but 2020 may be a better year for Dems, and if so they will likely tilt the field to their advantage, too.

What does any of this have to do with gridlock in Washington? Plenty.

Once politicians draw themselves into safe territory for re-election, they are less accountable to voters. They feel no incentive to moderate their words or actions if their greatest threat to being unseated comes from a primary challenge (from a more extreme member of their own party) instead of the general election. “Playing to the base” becomes much more valuable than seeking compromise.

Get outside your media bubble

Here’s something you actually have control over. It’s tempting to think this is a bigger problem among conservatives – after all, liberals aren’t the ones who decided to create their own airtight media ecosystem (Rush, Hannity, Drudge, Fox News, etc.) based on the belief that “mainstream” media is out to get them – and we’ve all seen the frantic, all-caps posts from our crazy relative or co-worker who only trusts news from gunsblazing.freedomeagle.net. However, let me ask you something uncomfortable: do you make an effort to listen to media you disagree with?

Don’t get me wrong. If you’re reading this, you’re absolutely smart and have great taste and I love you – but one side of any coin isn’t worth anything. This is a fairly liberal site. I like to think we Idiots have reasoned and nuanced views about things, but you shouldn’t rely on us or any single source for all your information.

Most of my liberal leanings, personally, end up being reinforced by the conservative media I consume. I spend a decent chunk of time looking for smart conservative arguments, but I rarely find them. It’s a strangely good feeling when I do, and I think it’s important to keep trying. If you find something persuasive, by all means change your mind. If you don’t, keep an open mind and feel better about your prior opinion in the meantime.

If nothing else, seeing the other side’s point of view will make you a better debater come next Thanksgiving. Which leads to our last piece of advice.

“There are two things you should never talk about: politics and religion.” What a load of crap. Disputes are resolved by people respectfully working through them. Ignored problems don’t get resolved.

It might seem like there is nothing worse than a political conversation-gone-wrong with someone you love. But there is something worse. Dying in a preventable nuclear holocaust brought on by Donald Trump’s determined ignorance in 2023 after being re-elected by millions of people who never had a conversation with a smart liberal like you is worse.

Talking about politics is hard. It’s uncomfortable. It can feel like you’re revealing a secret about yourself, and maybe you aren’t ready for that today. Or maybe you’re concerned that once you get rolling, your mouth will unexpectedly rattle something off that turns everyone else away from the conversation. You don’t want to feel embarrassed.

I get that. I’m also asking you to reconsider. It will probably take some practice, but getting better always takes practice, and this is worth that effort. We as a society suck at talking politics right now. It’s a problem in need of a solution, and there’s no magic bullet.

So if you’re an Idiot like me, and you don’t like the government being shutdown every few years by unreasonable people who can’t compromise with the other side, please try to win someone over. I’ll be listening for you.